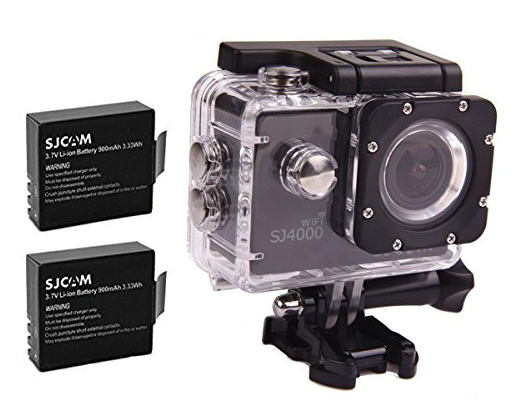 One of the fastest growing segments in the digital camera market today is in the so-called “action cameras”, which are generally small and lightweight video recorders that are designed to be carried by the photographer as they engage in sports or other action activities and record the events from the photographer’s perspective while they are actually participating in the activity as well as it as it happens.  The sports or action activities that these cameras can be used in quite varied and can include activities such as cycling, operating a motorcycle, skateboarding, skiing or surfing.  These cameras are even seen on pets as well!  Often the video that is recorded is uploaded to various platforms such as FaceBook or YouTube where they shared with friends and strangers alike.  While the marketplace is crowded with dozens of cameras being available, the SJCam SJ4000, which was introduced in 2014, is one on the best deals on the market today.

Some Features of the SJCam SJ4000 Action Cam

CMOS sensor: The heart of the SJ4000 is the CMOS sensor, which records video, as well as still images at 12.0 megapixels  The camera also sports a fixed lens, which has a super wide angle field of view of 170°!  While the lens is fixed, the SJ4000 also features a 4X digital zoom, which is very useful in a variety of situations.

Optics & LCD Screen: While the optics are quite good for a camera that has a suggested retail price of $79.00, it is the other features of the camera that really set it apart from other cameras in the action camera category.  One of these features is the rear LCD screen, which allows the photographer to access the camera’s extensive menu system without using a computer or Smartphone interface.  Video and still images can also be previewed in the screen as well, while the screen also provides “live view” of the images being captured.  While small at 1.5” the fixed display is very useful and handy in actual use.

Full HD Video: Video is captured in Full HD at a frame size of 1920 x 1080 and is recorded at 30 frames per second.  In addition, the camera is capable of shooting in smaller formats as well.  Many will appreciate the fact that the camera can also capture still images as well, which makes the camera very versatile in the field.  The photographer can select the resolution of the still images with the available range being 1.5 to 12 megapixels. Video is recorded in MOV format, while still images are captured in JPEG formats, with images being stored in the camera’s single micro SD or micro SDHC memory cards.  While there is a WIFI capable SJ4000 model available, the base SJ4000 reviewed here does not have WIFI capabilities and will require that images  be transferred to a computer via the USB cord.

Image Quality: Image quality is pretty good in both still and video images in most conditions.  The built-in face detection feature, as well as the anti-shake software, which provides image stabilization, are partially responsible for the SJ4000 having decent image quality.   One thing to keep in mind however, is that image quality definitely goes down in low light.  In most cases the video or still images are still useable, however, the user needs to manage their expectations in this area as it is not a DSLR capable of capturing excellent image quality when high ISO settings are needed.

Size: Another feature of the camera that is useful is the size of the camera, which is small at 2.3” x 1.6” x 1.2”.  The size is small enough to be carried in a shirt pocket but is big enough to allow operation of the various buttons without any problems.  Often cameras can be so small that they are difficult to operate the controls, but this is not the case of the SJ4000.  Weighing 2.1 ounces with the lithium ion battery, the SJ4000 is light enough so that it is not noticeable when mounted on a bicycle helmet.

Controls: As far as controls are concerned, the SJ 400 features the lens and the power / mode button on the front face, with the rear face featuring the LCD display.  On one side of the camera the microphone, single SD memory card slot, a micro HDMI port and a micro USB port are located.  On the other side of the camera is the speaker, as well as an “up” and “down” button, which is used to navigate the camera’s menu.  On the top of the camera, the photographer will find an indicator light, as well as a “OK” button, which is also used to navigate the camera’s menu system  On the bottom surface is the battery door and battery key.  One of the best things about the controls is how they are generally flush and will not snag on clothing.  In practice, the controls were quite intuitive and easy to use.

Ports: The inclusion of the micro HDMI and USB ports are very useful as the SJ4000 can be connected to a TV via a HDMI cable allowing video and still images to be viewed directly from the camera.  As for the USB port, this allows images and video to be transferred to a computer, as well as one means to recharge the lithium ion battery.  Interestingly the SJ4000 used as a web cam when connected to a computer as well.

Mounts: The camera comes with lots of different mounts ranging from a bike mount to a multifunction mount, as well as a water resistant casing, which will allow the SJ4000 to be operated at depths of up to 30 meters.  The SD4000 can literally be mounted to almost anything!  While the camera is plastic, it appears to be well made and capable of taking a reasonable amount of abuse in the field.  The SJ4000 is available in a number of different colors including black, blue, golden, red, silver, white and yellow.

Technical Specifications of the SJCam SJ4000

All in all I really like the SJCam Sj4000 and found it to be quite a value at $79.00, especially when I looked at the advanced features on the camera.   While a bit bigger than some of the other action cameras on the market, it is somewhat unique in the versatility of the camera, as well as some of the features such as a rear LCD, image stabilization and facial recognition.  It is hard to find a camera that is equally at home diving in the Caribbean or on a mountain bike riding single track in the mountains of Utah.  Many more experienced photographers will appreciate the ability to easily navigate the camera via the menu system and not be tied to setting up the camera with a Smartphone.  I know I try to leave my phone at home or in the car when I am doing the activities that the SJ4000 was designed for.

In my experience with the SJ4000, I found the image quality to be actually quite good overall and while I was initially a bit put off with the camera’s low light performance, I found that it did not really matter too much as I use the camera as a “action camera” primarily and almost all of my sports and other activities such as rock climbing, skiing and flying airplanes occur during daylight hours anyway.  When I need a camera with excellent low light capabilities using high ISO settings, I break out one of my DSLR cameras anyway.  Anyone looking for a capable action camera that will not break the bank should take a hard look at the SJCam SJ4000  I think they will be surprised with what $79.00 gets them.  I know I was!