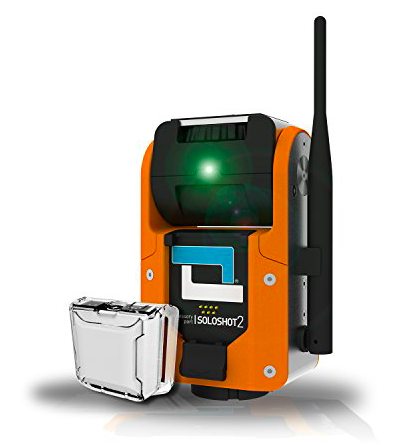 The selfie stick may have put some curse on mankind, but there are still plenty of valid reasons you’d want to be in a photo, group shot or other situation. And while a selfie stick may be good for a lightweight smartphone, that’s hardly a solution for a DLSR or camcorder user. Enter the SoloShot2, a smart, self-adjusting camera base that fits on a standard tripod and will track the user via a detector, allowing you to take shots from distance and still be in them. That makes it perfect for those artistic shots when you’re climbing a cliff face, out surfing, by a monument or just at the end of the garden with the family.

The magic in theSoloShot2is the GPS tracking device that the user wears, and the rotating, tilting base that enables the camera to keep focused on the wearer. It uses a green LED to keep the user in view. The base can work for eight hours, while the tracker can work for four, but you can purchase multiple trackers for long days of filming or shooting.

It also features an accessory port to allow you to take control of the camera to change settings while that tag is waterproof if you’re trying to take arty waterfall shots or plan to record your surfing or water skiing exploits.

For pro or enthusiast shoots, you can have multiple bases tracking the same tag to shoot from different angles, and you can also mount spotlights on the SoloShot to add lighting to your shoots. Other examples of use include following a player (with the tag) on a sports field, which makes for some great home highlight reels, without someone having to slavishly film the player all game.

Pros of the SoloShot 2

The big selling point with the SoloShot2 has to be the ability to walk into the woods, or up the beach and record or photo your exploits without needing to be behind the camera at the same time. For explorers, sports enthusiasts, climbers, there’s an obvious attraction in being able to shoot yourself from afar.

With the light tracker, of which up to 10 can be paired to a base at once, you and your team can be all over the place, and the device will keep everyone in frame, as best it can, although the GPS will get lost if you all rush into dense foliage or other cover.

The SoloShot2 comes with four main modes for smartly capturing the right shots or footage. Surf & Turf mode is ideal for shooting field sports and games, as the action is confined to one area. For climbing or events like BMXing with lots of vertical movement, there is the Big Altitude mode.

There’s also a Cinematic mode locks the tilt allowing for panning only, while the Barrel mode will smartly keep a surfer in focus as they ride waves, assuming you’re that good a surfer. These modes alone will cover most uses and enable great action shots

Cons of the SoloShot 2

Security has to be the prime concern when you’re up to 2,000 feet away from your camera, leaving it very exposed for a passing thief to walk away with. It comes with a K-Lock, and they recommend fixing it to a solid object with a bike lock, but out in the wilds, obliging solid objects are probably hard to come by.

In practical terms, you may also need a few different mount adapters to connect various devices, as the SoloShot2 has a pretty thick connector screw. It also takes around 10 minutes to set up, so this won’t be useful for short notice events, so keep that selfie stick to hand.

One curious limitation is that the SoloShot2 is only recommended for outdoor use, likely due to the GPS solution and the minimum of 30 feet distance needed to work. However, the company states that is a “current limitation”, which suggests they will have a fix or firmware update for it soon. Other limitations include the base needing to be stationary, so you can’t put it on a boat in a swell to track people on kayaks or in the water.

Also, at 3.3 pounds per mount, this is another bit of heavy kit to lug around, which may make those multi-camera and well lit shots a multi-person trek anyway, in which case you may as well stick a person behind the lens! Finally, it can only support cameras up to 5lb in weight, so you want to risk putting an expensive camera with a big lens on, and risk it crashing to the floor.

While there are plenty of caveats and limitations for the SoloShot2, the overall idea is a brilliant one. While the unit isn’t cheap at around $419, plus $299 for extra bases and more for tags and other accessories, you can see these helping indie filmmakers shoot their next epic or action sports stars increasingly shooting their own footage.

If you have one of the original SoloShot models, then the new version adds vertical axis tracking, automatic zoom control, and much more making it a pretty cool upgrade. You’ll only want to stick with the original if there’s not much height or distance variation involved in whatever you shoot.

While much of the work will still need to be done back in the editing suite, the SoloShot makes creating great and accurate raw footage a dream, and can reduce the number of people you need on a shoot, that alone makes it a worthy investment, and we’re sure owners will find all manner of cunning uses for it.