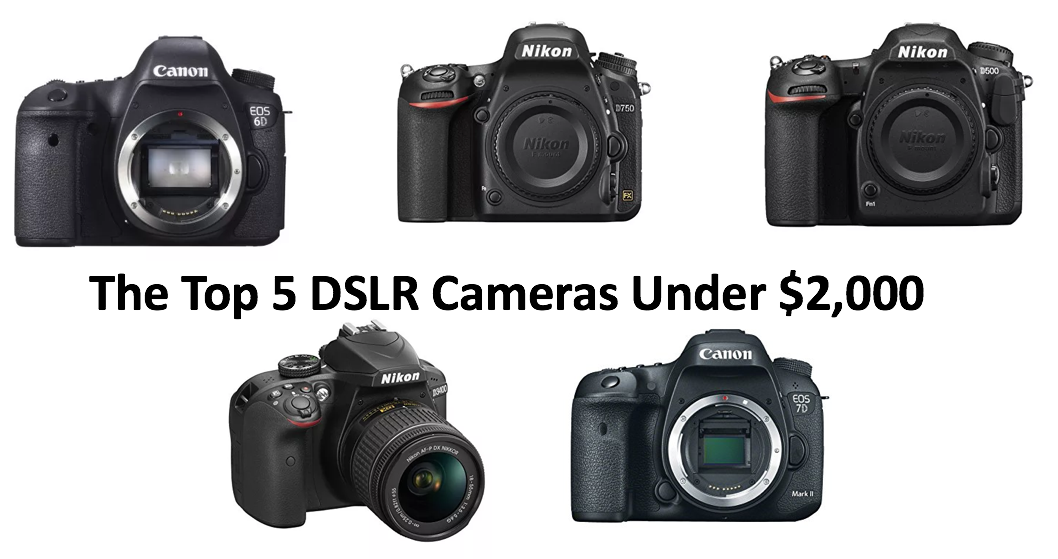 Today’s consumers are fortunate to have access to dozens of digital single lens reflex or DSLR cameras at all price points with many having overlapping features.   These features seem to change year to year as new cameras are introduced, making the decision process even harder when shopping for a new camera.  The camera’s today are all very good and it is not necessary to spend thousands of dollars to get a truly great camera body.  Let’s take a look at the top 5 DSLR camera bodies currently on the market with a suggested retail price of $2,000 or less.

The Canon 6D, which was first introduced in 2012, was the first of the so-called “budget full frame” cameras.  These cameras, which were built around smaller and lighter weight APS-C bodies, feature full frame CMOS sensors.  In the case of the 6D, the sensor measures 35.8mm x 23.9mm and has a resolution of 20.2 megapixels.  The 6D is a excellent camera and has been a very popular camera for Canon, as it hit a “sweet spot” in the market for consumers looking for a full frame camera at a lower price point than the Canon 5D Mark III and Mark IV series.

Canon was able to accomplish this by downgrading the specifications on the 6D without impacting the camera’s excellent image quality.  A majority of consumers find the camera’s ability to capture images at 4.5 frames per second and the shutter speed range of 1/4,000 – 30 seconds to be perfectly acceptable, even for most sports and action photography.   Consumers also actually find the 6D’s 11 auto-focus points to preferable to other viewfinders, where the large number of auto-focus points is distracting.  One of the best features of the camera is the C1 and C2 settings, which allow the photographer to recall user-defined camera settings that they store in the camera’s memory, by simply turning a dial.

Although the 6D does not have a built-in flash, it does feature built-in GPS and WIFI capabilities, as well as the ability to record full HD video with a frame size of 1,920 x 1,080 and at 24-30 frames per second.  The 6D is significantly smaller and lighter than most full frame cameras measuring 5.7” x 4.4” x 2.8” and weighing 24.0 ounces.  The camera also features a rugged build with aluminum, magnesium alloy and high impact plastic components.

The Canon 6Dis an excellent choice for someone looking for a full frame camera body for under $2,000.  At a suggested retail price of  $1,899.00, the 6D is a great value for such an advanced camera. Check out the latest discounts and prices here.

Here are some of the specifications on the 6D:

In addition to being the newest camera on the list, the Nikon D3400 is also the least expensive camera with a list price of $649.95, which also includes a Nikkor AF-P DX 18-55mm f/3.5-5.6 VR lens. (Check out the latest discounts and prices.)Built around Nikon’s DX format or “cropped sensor” format, the camera features a 24.2 megapixel CMOS sensor, which delivers exceptional image quality.

Although featured in Nikon’s “entry level” lineup, the camera offers excellent specifications rarely found in cameras at this price point.  Features include a native ISO range of 100 – 25,600 and a frame rate of 5 frames per second.   Images are captured as RAW or JPEG files and are stored on the camera’s single SD, SDHC or SDXC memory card.  The D3400 also has a built-in flash and while it does not have a GPS unit, it does feature wireless capability via Bluetooth®, which allows images to be transferred to a Smartphone via Nikon’s SnapBridge technology.  As with all of the cameras on the list, the D3400 features full HD video, as well as a number of other formats.

The best feature of the camera is the small size and weight of the camera, as well as its ease of use.  Measuring 4.9” x 3.9” x 3.0” and weighing a mere 14.0 ounces, the D3400 is easy to carry around even for extended periods of time.  The D3400 features a very easy to navigate menu system and includes a number of preset scene modes, as well as the auto, manual, aperture priority and shutter priority exposure modes.

The Nikon D3400 is an excellent choice for someone looking for excellent image quality and a great value!

Here are some of the specifications on the D3400:

Check out the latest prices and discounts.

The Nikon D750 was first introduced in 2014 as one of Nikon’s “budget full frame” camera bodies to compete with Canon’s 6D.  Featuring a full frame CMOS sensor that captures images at 24.3 megapixels, the D750 also features a frame rate of 6.5 images per second, a shutter speed range of 1/4,000 – 30 seconds and a viewfinder that provides 100% coverage.

The D750 features an excellent autofocus system that has up to 51 autofocus points, with the system being fast and accurate.  Image quality is excellent even in low light conditions despite the camera having a native ISO range of “only” 100 – 12,800.  Unlike the 6D, the D750 also features a tilting rear LCD display, a built-in flash and two memory card slots.  While the D750 does not have a built-in GPS unit, it does feature built-in WIFI, as well as full HD video.

Other features include U1 and U2 settings, which allow the photographer to instantly recall user-defined camera settings that they store in the camera’s memory.  The D750 is also small in size measuring 5.6” x 4.5” x 3.1” and weighs in at 26.5 ounces, making the D750 easy to carry in the field for extended periods of time.

The D750 is a great camera for someone who is looking a “budget full frame” camera and likes Nikon’s lens lineup.  With a suggested retail price of $1,995.95, the D750 just squeezes in under $2,000! Check out the latest discounts and prices.

Here are some of the specifications of the D750:

Check out the latest discounts and prices.

The Canon 7D Mark II is the follow-up Camera to Canon’s highly regarded original 7D.   The 7D Mark II was introduced in 2014 and is based on a CMOS sensor, which uses the APS-C or “cropped sensor” format.  As one would expect the image quality of the 7D is excellent, even in low light conditions despite the camera’s relatively low native ISO range of 100-16,000.

Although the camera does not have built-in WIFI capabilities, it does have a built-in GPS, which is very useful when geo-tagging images.  Designed primarily as a sport and wildlife camera, the 7D Mark II features a frame rate of 10 frames per second, as well as a shutter speed range of 1/8,000 – 30 seconds.  As with the other cameras, the 7D Mark II features full HD video, with a frame size of 1,920 x 1,080, with the frame rate being 24-60 frames per second.

Other features include two memory card slots, a magnesium alloy shell, a viewfinder that provides 100% coverage and a built in flash.  Similar to the Canon 6D, the 7D Mark II features C1, C2 and C3 settings on the camera’s top dial, which allow the photographer to instantly recall stored settings that the photographer configures in the camera’s memory.  Due to its robust build, the Canon 7D Mark III is a relatively large camera measuring 5.85’ x 4.43” x 3.08” and weighing in at 28.92 ounces.

The Canon 7D Mark II is an excellent professional grade cropped sensor camera that is perfect for sports and wildlife photography.  That being said, it is also a very good all around camera as well.

Here are some of the specifications of the 7D Mark II:

The Nikon D500 is another camera that was introduced in 2016 and Nikon’s delayed response to the Canon 7D Mark II.  Based on the DX or “cropped sensor” format, which uses a smaller CMOS sensor, the camera captures images at 20.9 megapixels, making the D500 an excellent sports and wildlife camera.  This is due to the “crop factor” found in the DX format, which makes standard lenses 1.5X longer than they are when used on a full frame camera.  The camera’s high frame rate of 10 frames per second and a shutter speed of 1/8,000 – 30 seconds are also very highly regarded features of the D500.

Image quality is excellent, which is not surprising, but what is surprising is the low-light capabilities of the camera.  This is the result of the native ISO range of 100 – 51,200, which can also be pushed higher as well.  This high ISO range is necessary if you do not like carrying a flash unit, as the D500 does not have a built-in flash, which is one of the downsides of the D500.

The D500 features 4K video, which is the only camera on the list to have this capability.   The image quality of this video format is striking, with the frame size being 3,840 x 2,160 and the frame rate being 24-60 frames per second.  While the D500 does not have a built-in GPS unit, it does feature WIFI capabilities, as well as a tilting LCD display with touch screen capabilities.

The D500 is a great camera and is perfect for someone who primarily shoots shorts and wildlife, as the high frame rate and the DX format are perfect for that type of photography.  It is also an excellent all around camera as well.  With a suggested retail price of $1,999.95, the D500 squeezes in under the $2,000 limit.

Check out the latest discounts and prices!

Here are some of the specifications of the D500:

Check out the latest discounts and prices.

All of these cameras are great and any consumer considering a new DSLR camera body should take a hard look at these cameras.  Today, no one is making a bad camera and it is important for the consumer to look at the features of each camera and how those features will impact their style of photography.   Also look at the manufacturer’s lens line up and pay attention to how the camera feels when handling it.  Remember a camera is a tool and to do any job, you need to be using the right tool!