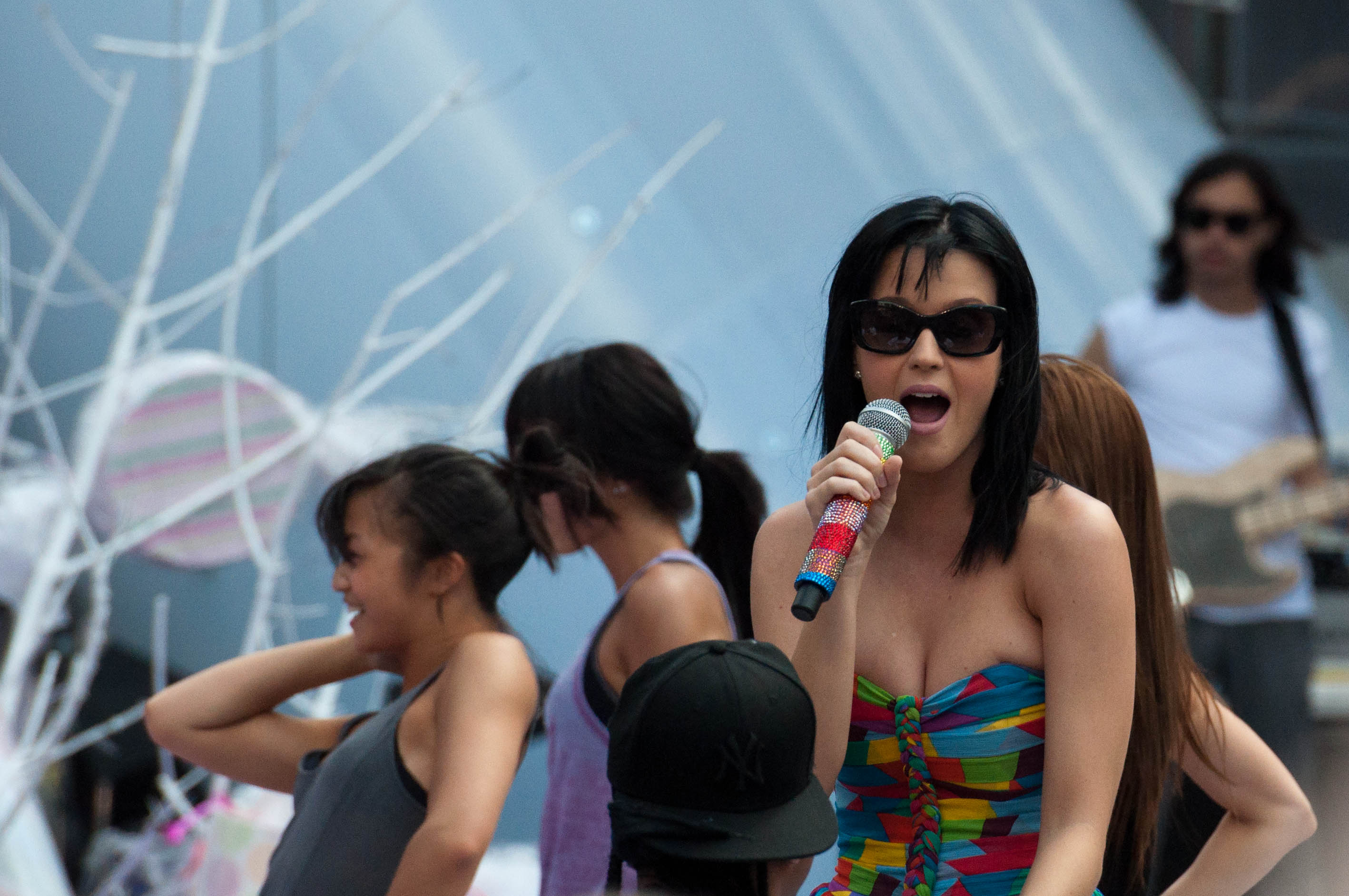 Today’s DSLR cameras are wonderful tools capable of producing excellent still image quality, especially when used by an experienced photographer.  What many people do not realize is how good the video quality is in these cameras. Over the past few years, DSLR cameras have increasingly been used to make a variety of movies, TV shows and music videos by professional and non-professional filmmakers and videographers.

What makes a good quality camera for video shoots?

The appeal of DSLR cameras to make music videos is driven by the excellent image quality, low light capabilities, as well as a relatively small and lightweight camera system that is easy to operate in tight quarters and is relatively inexpensive.  This holds true for both videographers making a music video for a small local band to post a YouTube or a professionally produced video used by a record label to promote an artist of a band on TV.

Some of the most important features to look for in a DSLR camera to be used to make music videos includes 4K and HD video capabilities, dual card slots, headphone jack, microphone jack, HDMI output jack, high native ISO and high resolution. While not a deal breaker, continuous autofocus is very desirable as well as it reduces the workload on the videographer.

One of the most popular DSLR cameras being used in the film and music video industry is the Canon 5D series of cameras with the Mark II and Mark III versions used to make such film, TV shows including The Bourne Legacy, House, The Avengers The Deadliest Catch and Iron Man 2, as well as countless music videos.  Introduced in 2016, the latest in the series, the 5D Mark IV will continue with this tradition due to the incorporation of the latest 4K video technology into the Canon 5D Mark IV.

Videographers making music videos will appreciate the camera’s high video resolution of 4,096 x 2,160, which is slightly higher than other camera’s 4K resolution due the 5D Mark IV’s 30.4 megapixel sensor. The frame rate at 4K is 24-30 frames per second and up to 60 frames per second with Full HD and HD video.  Video files are stored as either MOV or MP4 files in the CF cards or SD type of cards, with the camera holding one of each.

The Canon 5D Mark IV features an excellent autofocus system that includes up to 61 autofocus points, which lock on and hold focus.  Videographers will have the ability to either manually focus or use the camera’s continuous autofocus capabilities to track the subjects in the video.  The autofocus is smooth in tracking subjects as they move, which is a requirement when making any video, but is key to making music videos.

Other features of the 5D Mark IV include the ability to record up to 30 minutes of continuous video at one time and the ability to use an extensive lineup of excellent Canon lenses including the professional L Series of lenses.  The 5D features a robust build with a magnesium alloy shell, as well as a fixed 3.2” rear LCD display that has touch screen capabilities.  Measuring 5.93” x 4.58” x 2.99” and weighing in at 31.39 ounces for the body only, the Canon 5d Mark IV is a professional grade camera capable of shooting outstanding music videos.  It has a suggested retail price of $3,499.00 but keeping checking here for discounts and updated prices.

Here are some of the specifications on the Canon 5D Mark IV:

Fujifilm is a well-known film manufacturer who has made a big impact in the camera world in recent years with their innovative “X” series of mirror-less cameras. While previous “X” series cameras were average at best as far as video capabilities are concerned, Fujifilm really upped their game with the X-T2, which was introduced in 2016.

As with the Canon 5D Mark II, the Fujifilm X-T2 is capable of shooting a variety of types of video including 4K, Full HD and HD. Unlike the 5D Mark IV, the 4K resolution of the X-T2 is slightly less at 3,840 x 2,160 due to the camera’24.3-megapixelel sensor. The frame rate of the X-T2 when shooting 4K video ranges between 24 and 30 frames per second and up 60 frames per second when shooting Full HD and HD video.  The camera features two memory card slots, which hold SD, SDHC or SDXC memory cards. Depending upon the type of video being recorded, up to 30 minutes can be recorded at one time, with the file format recorded being .MOV.

The Fujifilm X-T2 features both manual focus and continuous autofocus capabilities when shooting video.  The autofocus system features up to 325 autofocus points, which while excessive, are accurate and quick to look and hold focus.  The system smoothly tracks and adjusts focus subjects as they move.  The camera features a tilting 3.0” rear LCD screen, which does not have touch screen capabilities.

One of the most appealing aspects of the Fujifilm X-T2 system is the size and weight of the camera.  Measuring 3.61” x 5.22” x 1.94” and weighing in at 16.1 ounces, the X-T2 is a very small and light weight video system, which can really impact the videographer’s ability to move around freely when shooting music videos, especially when using a hand rig to compose videos.

Other features of the X-t2 include the Fujinon series of camera lenses are excellent and second to none, even though they are not as well known as the other manufacturers.  Due to Fujifilm’s roots in film, the various film simulation modes found in the X-T2, including “Classic Chrome”, are excellent.  Videographers can use these simulation modes when shooting video, which can really add to the uniqueness and creativity of the music video being shot.  The X-T2 body retails for $1,599.00, which is quite a value given the high quality of the video captured. Of course, you can always check here for the latest prices and discounts.

Here are some of the specifications of the Fujifilm X-T2:

Check here for the latest prices.

Like the Canon 5D mark IV and the Fujifilm X-T2, the D500 is capable of shooting 4K video as well as Full HD and HD video. When shooting at 4K, the resolution of the video images is 3,840 x 2,160, due to the camera’s 20.9-megapixel sensor. The frame rate when shooting 4K video ranges from 24 – 30 frames per second.   When shooting Full HD and HD video, while the resolution drops, the rate increases up to 60 frames per second, although the resolution decreases.  The camera features two memory card slots, one of which holds an XQD card, while the other slot holds an SD, SDHC or SDXC memory card.  Depending upon the type of video being recorded, up to 30 minutes can be recorded at one time, with the file format recorded being .MOV.

What really will make the D500 appealing to videographers is the camera’s extremely high native ISO range of 100 – 51,200, which makes the D500 perfect for low light situations.  It is important to note that even at high ISO settings, which are the highest of the three cameras, the video is free of noise, while retaining detail.

The D500 features a very good continuous autofocus system that features up to 153 autofocus points.  The system is very good at finding and maintaining focus smoothly, even when the subject moves.  The videographer also has the option to manually focus the lens as well.  Speaking of lenses, the D500 can shoot with a wide variety of standard and cropped sensor lenses including older lenses as a result of the F mount on the camera, which has been on all Nikon cameras since 1959.

Other features of the D500 include a 3.2” tilting rear LCD display, a touchscreen that is a very handy tool that really helps reduce the workload when shooting video.  In addition, the D500 features a very tough and robust professional grade build featuring a magnesium alloy shell and extensive moisture and dust projection.  As a result, the camera is fairly large and heavy measuring 5.8” x 4.6” x 3.2” and weighing in at 26.9 ounces.  The D500 retails for $1,999.95. Check out the latest prices and discounts here.

Here are some of the specifications of the Nikon D500:

Check out the latest prices here.

All of these cameras are excellent choices for a DSLR camera that is capable of making excellent music videos.  One thing to keep in mind with all of these cameras is the limitations of the audio capabilities.  While all of the cameras have a built-in microphone, the audio quality is average at best.  Anyone looking for the best possible audio, where the music sounds as good as the video looks, should consider adding a “shotgun” external microphone, as well as an external digital recorder to their setup when recording at a concert or a venue.

If the budget for the video allows, a studio session should be done in a recording studio with a sound engineer to achieve optimum sound quality. Anyway, take a look at all of these cameras and see which one you like best.  Then get out there and start making music videos. I bet you will have a lot of fun doing it and may give up still photography!