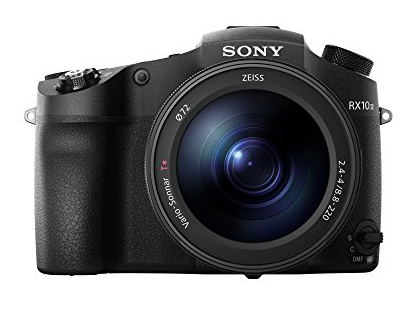 Sony has quickly become of on the leading digital camera manufacturers, as a result of their innovative mirror-less and compact digital cameras.  Cameras such as the “Alpha” series, the RX100 line and numerous Cyber-shot compact cameras have offered consumers a more affordable alternative to traditional DSLR cameras without sacrificing image quality.  The Sony RX10 Mark III, which was introduced in 2016, is one of those cameras and what a fun camera it is!

Image Quality: The RX10 Mark III is built around a 1” CMOS sensor that captures images in 20.1 megapixels.  While the sensor is relatively small at 0.52” x 0.35”compared to larger APS-C or full frame sensors found in many DSLR cameras, the image quality is very good, even in moderately low light situations.  This is mainly due to Sony’s extensive experience in developing digital camera sensors and many of the sensors found in the major DSLR cameras are actually manufactured by Sony.

Lens: As with many other Sony cameras, the RX10 Mark III uses a lens manufactured by the German optics company Carl Zeiss AG, which was founded in 1846.  The company has an excellent reputation for manufacturing excellent optics and the Ziess® Vario-Sonnar® lens.  While the lens features an aperture range of f/2.4-4.0, what really sets the lens apart is the 25X optical zoom, which provides a focal length of 8.8mm to 220mm.  This is the 35mm equivalent of a 24mm to 600mm lens on a full frame camera!  As one would expect, the RX10 Mark III has built in image stabilization that is very effective in eliminating camera shake that results in blurred images, especially when the camera is shooting at the upper end of the focal range.

Exposure Modes: As with most cameras in the Sony lineup, the RX10 Mark III is capable of shooting in a variety of standard exposure modes including, Auto, Programmed Auto, Aperture-Priority, Manual and Shutter-Priority.  This allows the photographer the ability to take as much control of the camera’s settings as they desire depending on the situation and the photographer’s level of experience.   Related to this is the camera’s various scene and creative exposure settings, which Sony calls “picture effect”.  These settings use pre-programmed settings to maximize the image quality for the scene or creative exposure settings selected.  Example of scene settings include landscape, portrait, sports and macro, while creative exposure settings include retro photo, toy camera, soft focus and partial color.  While some photographers may feel that some of these settings are “silly”, they are actually quite fun to use and can result in some really unique images.

Rear LCD display: The camera has a bright rear LCD display that measures 2.95” and while not a touch screen display, the display does tilt, which is a very useful feature when composing images.  The display is used to preview still and video images, as well as to navigate the camera’s relatively simple menu system.  In addition, the display is useful when composing images using the “live view” feature instead of the electronic viewfinder.

ISO Range: The Sony RX10 Mark III features a native ISO range of 100-12,800, which is more than sufficient for shooting in low light conditions.  While the camera’s ISO can be expanded down to 64 and as high as 128,000, these features really not that useful and more in line with the trend with today’s camera manufacturers to market insanely high ISO settings, which really not that useful in real life.  As with most cameras, the ISO setting of the RX10 Mark III should be kept in a reasonable range, as image quality tends to suffer at high ISO settings, as the camera’s software reduces image detail as it reduces noise.  This is the case in a majority of cameras and is not an issue limited to the RX10 Mark III.

Sony has a long history with video cameras and it should be no surprise that the RX10 Mark III has excellent video capabilities and is capable of capturing video in a variety of formats including 4K, as well as other formats as well.  4k video is shot at 30 frames per second with a frame size of 3,840 x 2,160, with the images being captured as either XAVC or AVCHD files.   As with other Sony cameras, the RX10 Mark III features a dedicated button on the rear of the camera to switch to video quickly without navigating the camera’s relatively simple menu system.

Some of the Cons of the RX10 Mark III

While the RX10 Mark III does not have built in GPS capabilities, it does have built in WIFI and wireless capabilities.  This can be used to remotely operate the camera from a tablet or Smartphone and to transfer images remotely.  Other features include a built in flash and a built in hot shoe to accept a variety of accessories including stand-alone flash units.

Measuring 5.25 x 3.75” x 5.15”, the RX 10 Mark III is not a small camera by any means.   That being said, the camera hands great and is pretty light at 37.1 ounces despite its big lens.   Build quality is decent with the camera being made in China and the body featuring all plastic construction.  It is important to keep in mind that Sony claims that the camera is moisture and dust resistant, which is not typical for other cameras in this class.

The Final Frame: My Recommendations

Anyone looking for a super zoom camera in a relatively small and lightweight package should consider the Sony RX 10 Mark III.  It is a serious alternative to a traditional DSLR camera with a variety of zoom lenses as the image quality is excellent and the camera is fun to use.  Many photographers will really appreciate the long lens, as well as the ease of use and at $1,599.99; the Sony RX10 Mark III will not break the bank!