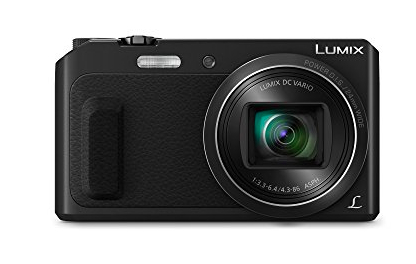 Versatility and Value: Reasons to Love the Panasonic Lumix DMC-ZS45

Today’s consumers have access to dozens of compact cameras that offer a wide range of features and capabilities, as well as price points.  While most consumers are familiar with many of the cameras offered by the major manufacturers, many are not aware of the Panasonic line of compact and mirror-less cameras that are marketed under the Lumix brand.  One of most popular cameras in their lineup recently is the Panasonic Lumix DMC-ZS45, which was first introduced in 2015.  The DMC-ZS45 is targeted towards photographers looking for a modestly priced camera that is suitable for day to day casual use but can also be used as a travel and vacation camera at the same time.

Some Features of the Panasonic Lumix DMC-ZS45

Resolution: Like many other compact cameras in this class, the DMC-ZS45 uses a 1/2.3” CMOS sensor, which measures 6.09mm x 4.56mm.  Images are captured in JPEG format with a resolution of 16.0 megapixels.   While delivering generally acceptable image quality in most lighting situations, the camera definitely lags behind many other cameras in this class as far as resolution is concerned.  That being said 16.0 megapixels is acceptable for most situations that the average photographer will encounter in a typical day of shooting.

The Lens: One of the best things about the DMC-ZS45 is the lens, which is a Lumix DC Vario with a 20x optical zoom.  This lens provides an excellent focal length that makes it perfect for travel!  It has a 35mm equivalent of 24mm – 480mm giving the photographer the ability to capture moderate wide-angle shots, as well as long telephoto shot in a single lens.  Long-range shots taken while hand holding the camera are not a problem due to the excellent built-in optical stabilization system found in the Panasonic Lumix DMC-ZS45.  Often this is an area where many compact cameras struggle, as camera shake is amplified at long-range zoom settings, especially when the camera is handheld.  Often these images will come out slightly blurred as a result, however, this is not the case with the DMC-DS45.

Rear LCD display: Like most cameras in this class, the DMC-ZS45 does not have a built-in optical or electronic viewfinder.  Instead, the camera uses the rear LCD display to compose images, as well as to preview images and navigate the camera’s menu system.  One of the nice features of this 3.0” display is that the screen is tiltable, which is a very useful feature when composing images, as well as shooting “selfies”.  While the screen is not a touchscreen display, it is fairly responsive when composing images with little lag in response to the camera being moved.

Autofocus: The Panasonic Lumix DMC-ZS45 also features 21 autofocus points that are relatively quick on finding and maintaining focus.  In addition, the camera has built-in face detection technology, which allows the camera to find faces in the image being composed and lock focus on those faces.  In practice, this feature works well and is quite useful.

Settings: As with most cameras in this class, the DMC-ZS45 has a variety of scene and artistic modes, where the camera uses pre-selected camera settings to optimize the type of image being composed.  In addition, the photographer can utilize a wide variety of standard exposure modes including intelligent auto, program, aperture priority, shutter priority and manual.  All of these settings are easy to select using either the camera’s menu system or the dial on the top of the camera.

Image Quality: The native ISO range of the camera is 100-3,200 and is expandable upwards to 6,400, however, the best image quality will be found at ISO settings of less than 800, which is pretty typical for compact cameras in this class.  Often in cameras such as the DMC-ZS45, when high ISO settings are used, the noise reducing software in the camera will reduce image detail as it reduces noise.  This results in images that appear to be soft and lack sharpness.  That being said, the DMC-ZS45 produces usable images in low light situations as long as the ISO is not pushed too high.

Shutter Speed: Depending upon the shooting mode selected, the shutter speed of the camera ranges from 1/2,000 to 30 seconds, which is a normal range for a compact camera in this class.  While it is not meant for sports, the camera would be fine for catching your kids running around in the yard.  One of the unique features of the DMC-ZS45 is the ability to release the shutter when taking “selfies” by simply winking at the camera, which detects the movement of the eyelids and fires the shutter.

Once the image is captured, the camera will process the image as a JPEG file and write it to a single SD, SDHC or SDXC memory card.  While the camera is capable of shooting at 10 frames per second, the camera does not have enough buffer built in to it to keep shooting at that rate until the 10 images are processed and written to the camera’s single memory card.  However, this is typical for compact cameras such as the DMC-ZS45 and should not be considered a limitation.

Shooting video: Those looking to shoot video will not be disappointed as the camera is capable of capturing video in a variety of formats including full HD with a frame size of 1,930 x 1,080 at speeds of 30 frames per second.  Video files are written as MPEG-4 files to the camera’s single memory card.  The video quality is decent for a camera at this price point.

Size and Weight: One of the best features of the camera is the size and weight of the camera.   Measuring 4.25” x 2.36” x 1.26” and weighing a mere 8.78 ounces, the DMC-ZS45 is easy to carry in a pocket or a small purse.  This is an area where many manufacturers of compact cameras struggle with either the camera being so small it is hard to handle or they are too big to be true “compact” cameras. This is not the case with the DMC-ZS45 as it handles well for a truly compact camera.

Other Features: Other features of the Panasonic Lumix DMC-ZS45 include the built in WIFI capabilities, which will allow photos to be geo-tagged using a smartphone.  This is a desirable feature, as the camera does not have GPS capabilities.  In addition, the camera has excellent battery life with up to 350 images being captured on a single charge of the lithium-ion battery.  This is a highly desirable feature in a camera that is marketed for travel and vacations, as no one really wants to be worrying about spare batteries while running around with the family.

**  The Panasonic Lumix DMC-ZS45 has been discontinued but is still readily available from multiple sources often at prices less than the suggested retail price.

At the suggested retail price of $299.99, the DMC-ZS45 has some pretty stiff competition from a number of competitors.  However, since a newer model has replaced the camera, the DMC-ZS45 is often available at significantly discounted prices, which makes the camera more appealing to those photographers looking for a compact camera that will not break the bank!  The Panasonic Lumix DMC-ZS45 is a decent compact travel and vacation camera and while it is not really a particularly exciting camera, it performs, as it should by producing decent images.  At the end of the day, that is all anyone can really expect a camera to do!