The Nikon D7100 and the Nikon D610 are cameras that were first introduced in 2013 and fit into Nikon’s enthusiast line up, which is positioned between Nikon’s Professional and entry level DSLR lineups.  The market for these two cameras is the experienced photographer, who are looking for more advanced capabilities and features than the cameras found in the entry lineup, but do not need the more robust build and waterproofing capabilities found in Nikon’s more expensive professional lineup.

In a big hurry? Check out my quick highlights for an overview of the comparison: Continue reading for the full comparison in detail..

There are two significant differences between the D7100 and the D610 with the first being the type of sensor being used and the second being the capabilities of the autofocus system.

Historically, full-framed sensors have been considered to be better than the less expensive and smaller cropped sensors.  This was especially true in low light conditions, where high ISOs were used.  While the cropped sensors were capable of excellent images, they tended to have “noise” in the image at the high ISO settings used in low light.  Processing software in the camera was capable of cleaning up the image during processing, however the images often lost sharpness as a result.  Due to advances in sensor technology, the newest cropped sensor and EXPEED 3 processor found in the D7100 are capable of capturing clean images at high ISO settings, without losing sharpness in the images during processing.  As one would expect, the full-framed sensor found in the D610 is capable of capturing sharp, clean images in low light where high ISO settings are used.

The other difference between the two cameras is in the autofocus system.  The D7100 has a 51-point system compared to the 39-point system of the D610. 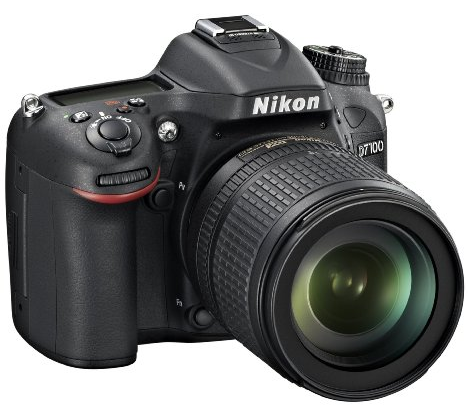 Pros and Cons 0f Both Cameras

As with any camera, there are a number of pros and cons to each camera. As far as “pros” go, the D7100 and the D610 are both capable of taking excellent photographs, which is more important than anything else.  Their size and lightweight make both cameras easy to carry around and eliminates any excuse not to carry the camera around all of the time.  The ability of both cameras to back up images to a second SD card is also a huge plus for both cameras, as well as the built in autofocus motors found in both cameras, which allows older lenses, without autofocus motors, to be used.

When you look at the cameras separately, the D7100 has really reduced the gap between crop sensor and full frame cameras, especially in low light situations.  The D610 has opened the enthusiast segment of the market to a full framed camera for under $2,000, which was previously unheard of.

The main “con” of both cameras could be the small size, as photographers with larger hands may find both cameras uncomfortable to grip for long periods of time due to their small size.  A related downside to both cameras is that they do not feel balanced when a large zoom lens is used, making the camera hard to stabilize when hand held, without a monopod or tripod.

While it is difficult to find any weakness in the D7100, the biggest downside of the D610 is the autofocus system, which tends to struggle for focus in low light situations.  However this was a compromise that Nikon purposely made to have a full frame enthusiast camera at this price point. Overall Recommendation: Which to Choose?

In many ways, Nikon confuses the consumer by having so many cameras on the market with overlapping capabilities both within the line up as well as the between the line ups.  Previously Nikon’s entry level and enthusiast cameras were in the DX format, while the professional grade cameras were FX.  Now Nikon has less capable FX format cameras in the enthusiast line up completing against superior DX cameras, which are cheaper.  This is true of the Nikon D7100 and the D610, with the D7100 representing Nikon’s most advanced DX camera, with the D610 being a less capable entry-level full frame camera, both of which are competing for the same consumers.

While both are excellent cameras, I prefer the Nikon D7100 to the D610, due to the superior performance of the D7100, as well as the lower price.  The D7100 is simply a better overall value when compared to the D610.  In my view, there is no justification for the $750 premium for the less capable full-framed D610, since the D7100 has virtually eliminated the performance gap between full frame and crop sensors.   If I were in the market for a full-framed camera, I would look at other options in Nikon’s FX line up, which provide better performance at a slightly higher cost, otherwise, I would buy a D7100, as it is provides the best bang for the buck!