Consumers looking for an excellent value in high-performance Nikon DSLR cameras should take a hard look at both the Nikon D610 and the D7200, both of which are found in Nikon’s “enthusiast” lineup.

While in the same lineup, both the D610 and the D7200 are very different cameras and are marketed towards different types of photographers.

The D610 is marketed towards photographers willing to accept certain performance compromises to be able to afford a camera that uses a full frame sensor, while the D7200 is marketed to photographers wanting the best possible camera using a “cropped sensor”.  The question remains, which is the better camera the FX D610 or the DX D7200!

The D610 and the D7200 share many significant similarities including megapixel count, memory slots, and memory type, image format, LCD screens, custom features, frame rate, flash and the ability to shoot video.  In the case of megapixel count, the D610 has a total effective megapixel count of 24.3 compared to 23.2 in the D7200.  This similarity is very apparent when comparing images between the two cameras, as the image quality or IQ is virtually identical.

Both cameras have two memory slots, which handle SD, SDHC or SDXC memory cards.  Here, either still image are recorded in RAW or JPEG format or video images in MOV format, are recorded.   The cards in both cameras can be configured by the photographer in a number of ways with the second card handling overflow from the first card, backing up images from the first card, recording RAW images or recording video images.

The D610 and D7200 both share a similar 3.2” rear LCD screen that is also fixed.  The screen has a number of uses including viewing the camera’s menus, previewing still and video images and composing images in “Live View”.  The screen is bright and easy to view in a variety of lighting conditions.

One of best features found in both cameras is the U1 and U2 settings found on both camera’s top dials.  These settings allow the photographer to save custom settings in the camera’s memory and recall them by simply turning the dial.  This is an excellent camera that is a very useful in the field and is only found on select Nikon cameras in Nikon’s “enthusiast” lineup.

The D610 and the D7200 both have advanced EXPEED sensors, which process images fast enough to allow a frame rate of 6 images per second.  This is a very fast frame rate for cameras at this price point!  They also have a built-in flash, which is very useful in low light situations or when the fill in flash is needed.

The D610 and the D7200 are very different in may ways including sensor type, ISO capabilities, shutter speed, autofocus systems and a number of smaller differences.  The D610 uses the larger 35.9mm x 24mm sensor, while the D7200 uses the smaller “cropped sensor”, which measures 23.5mm x 15.6mm.  Although smaller, the sensors on both cameras capture images that are virtually identical as far as image quality is concerned.  This is due to advancements in sensor technology since 2012.

While both cameras’ autofocus systems are very good and allow fast and accurate autofocus, the number of autofocus points and their placement in the camera’s viewfinder are significantly different.  The D610 has a total of up to 39 points, all of which are located in the central part of the viewfinder, which provides 100% coverage.  In the case of the D7200, the camera has up to 51 points, all of which are evenly distributed throughout the viewfinder, which also provides 100% coverage.

Smaller differences between the D610 and the D7200 include WIFI capability, size, and weight.  While neither camera has built-in GPS capability, the D7200 does have WIFI capability, which allows the camera to communicate to smartphones, as long as an app is installed on the phone.  The D610 has this capability thru an optional add-on accessory that plugs into the phone.

The D610 and the D7200 are both excellent cameras capable of capturing excellent image quality in a wide variety of settings, however, neither camera is perfect by any means, with each camera having a number of “pro” and “cons”.  It is up the consumer that is considering either camera to closely consider the positive and negative features of each camera and carefully weigh how those features will impact their style of photography and make their selection accordingly.

The biggest positive or “pro” of the D610 is that it is an excellent value for a full frame camera.  While it does not have the same features as Nikon’s other more expensive full frame cameras, the image quality is as good as Nikon’s top of the line D5, which costs five times as much!

The biggest positive aspect of the D7200 is the excellent sensor found in the camera.  In the past the image quality found in “cropped sensor” cameras lagged behind the IQ found in full frame cameras, especially in low light situations where higher ISO settings were used.  Now as a result of better technology, the image quality gap has been eliminated.

The biggest negative feature of the D7200 is the size of the camera, which is small at 5.4” x 4.2” x 3.0”, especially for photographers with small hands.  This is especially evident when carrying it around for extended periods of time or when larger zoom or telephoto lenses are attached.   Another negative aspect of the D7200 is that some of the features of the camera are over specified and are more related to marketing considerations than actual useful features.

Two of the areas that appear to be over specified include the 51 autofocus points and the capability to expand the camera’s ISO capabilities to 102,400.  Most consumers will never find these increased specifications useful in the real world, but would have preferred a camera at a slightly lower price point.

The Nikon D610 and the D7200 are both excellent cameras, which are capable of capturing outstanding images in a wide variety of situations.  While I generally prefer full frame cameras, I prefer the D7200 to the D610 for a number of reasons.

First, the image quality of both cameras is virtually identical, even in low light situations using higher than normal ISO settings.  Image quality is very important to me, as is value, so I cannot justify paying $300 more for the full frame D610, since the images appear to be the identical. 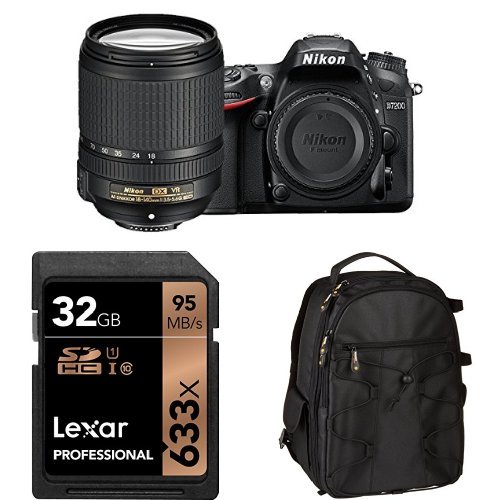 Which is Better? The Full Canon M5 vs. Sony A7 Comparison