The Mid-priced, mid specification DSLR camera market is, and will remain, one of the most fiercely fought of all, with manufacturers keen to entice those looking to buy an entry level body that is capable yet not too expensive.  Those buying products at either end of the camera market are either happy with a compact snapper or, increasingly a mobile phone camera, or have already made their decision based on the existing lenses and ancillary equipment that they own.  If you own a top end Sony and have $15,000 worth of Sony lenses, you are unlikely to be looking at a Canon as a possible replacement.  It is the middle field where bodies are not too expensive and third party lenses are of sufficient quality to give the amateur photographer great results without the enormous expense of buying branded lenses.

And because this market is potentially so huge, all of the major manufacturers are vying for business, which just makes the consumers job a little harder as they are confronted with a range of cameras with seemingly little to choose between them.  In this article we will look at two of the main contenders for this market and try to help you make a decision. Nikon and Canon are two of the major names in the camera market and with years of experience and solid design behind them, you can be assured of functionality with top notch quality.  They both offer a very reasonably priced entry-level DSLR in the form of Nikon’s D3100 and Canon’s T3i, and if you have owned either of these brands before you are likely to be swayed a little by the name itself, but if we take that factor out of the equation how do they fare then?  On paper there looks like some major differences between these two cameras but is that really the case and is there a clear winner between the d3100 vs the t3i? 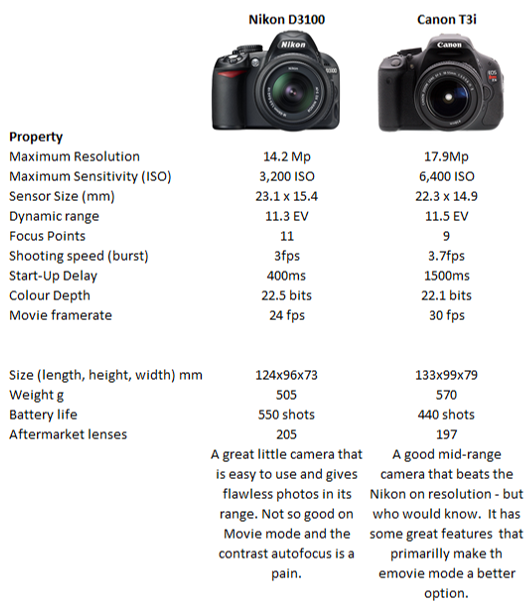 This is the major difference between these two and, on paper, it looks as though the T3i with its 18 megapixel resolution is clearly better than the D3100 with only 14 megapixels, but let’s hold on for a moment and think about what that really means.

Sure the numbers are different – 18 to 14 – but in real terms unless you are gouging to be blowing up your photo’s to wall-sized prints, the human eye is simply not going to recognise the difference.  Image resolution reached a tipping point many megapixels ago and suggests that one camera is better than another based simply on is just spurious.  For the amateur-to-keen average photographer, there is simply no practical difference between these two cameras in terms of resolutions so we should ignore it as a real factor.  There is a slight difference in the grades of colour that each camera can see, with the Nikon identifying 22.5 bits of colour compared to the Canon’s 22.1, but the difference is so minute that, like the overall resolution, who the hell is ever going to notice?

Image quality also leaves little to choose between these models.  The Nikon sensor is able to determine up to 22.5 bits of color against the Canon’s 22.1.  It is only a very small difference and, again, the colour graduations will only really be noticeable if you are expanding prints to poster size or bigger.  Like the maximum resolution, it’s nice to know that it’s there, but it really won’t impact the average photographer. Both the D3100 and the T3i crop the image that your lens actually see’s.  The D3100’s DX sensor as approximately 10% bigger than the T3i’s APS-C and crops slightly less, but they both still apply this reduction to the final image and you may consider this a more important factor than the simple maximum resolutions as both these cameras drive you to take more and better photos and once you a start factoring in buying new lenses.  It won’t take many purchases of expensive aftermarket lenses for you to notice how the image is being reduced by the sensor.

Again, there is actually very little to choose between these two models.  True, the Canon has a higher native sensitivity of 6400, compared to the Nikon’s 3200, but they both have a user-controlled equivalent that bumps the ISO up to 12800, should you ever need it, which should be more than adequate for everyone up to semi-professional.

With many people relying on the automatic settings of their camera – even at this level – the ability to autofocus becomes an important factor.  While some will spend their time understanding settings and taking time over a shot, many will still use these level of camera’s as a simple point and shoot device, and will attain some wonderful phots doing it.  But this means that the camera’s ability to autofocus and fast with it is a deciding factor in purchase.

The D3100 has a total of 11 autofocus points with only the centre point being the joint horizontal and vertical focusing cross type.  In comparison, the Canon has only nine, with the centre point also being a cross-type.  This is, again, one of those small differences that don’t actually translate into something that you could hold against either camera.  The two cameras have very similar shutter lag – 279 milliseconds for the Nikon and 283 milliseconds for the Canon – so it becomes a moot point.  While the two cameras have a bespoke ‘Sports’ setting to beef up response, neither of them are the kind of equipment that professionals are going to use to record professional sporting events.  In ‘burst’ mode, the Canon has the slight edge with an ability to take 3.7 frames per second compared to 3 frames per second, and if you are taking snaps at the local school sports day, either of them is finer and will produce photos you can be proud of.

There are many ‘slight’ differences between these two great cameras and many of them are highlighted in the table below.  With both of these it really is a case of six of one, and half a dozen of the other.  There simply is no major difference between them. 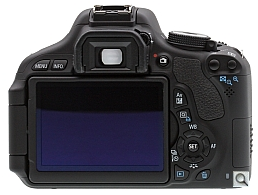 Most modern mid-range DSLR cameras now come with video mode enabled.  Personally, I have never felt the need to fill my SD card with gigabytes of video, but many people like it as a credible alternative to carrying a small video camera too.  Both the Nikon and the Canon are capable of shooting full 1080p HD video.  The Nikon comes with the autofocus ability in video mode but herein lies a bit of a problem.  Despite having a small advantage in the still photo autofocus stakes, it doesn’t use these for video mode, and relies of a much simpler light/dark variance system for this.  And because the system is so simple, it can easily become confused when the contrast is low, leading to it ‘hunting’ for focus and your child’s birthday party being a mish-mash of in and out of focus video.

In addition, the T3i has a flip out screen, which may not seem a big advantage, but since many people video very short things – like children and animals – or have the camera at odd angles, the ability to move the screen becomes very useful.  The Canon also has an external microphone jack so that you can plug in some serious sound equipment.  When you also add in the fact that the T3i has a slightly higher frame rate – 30fps versus 24fps for the Nikon – taking video on the Canon is a much better prospect.

It’s almost a testament to market forces that there is so little to choose between these two cameras.  The major manufacturers know what the buying public want and they deliver it in spades.  But that just leaves the consumer with a bigger problem; how do you choose between great cameras like these two.  And it’s not just confined to Nikon and Canon – there are plenty of other manufacturers also fielding similar equipment, which varies only very slightly, creating an even bigger headache for those in search of a good, entry-level DSLR.

The pros and cons between them are small and there will be a great deal of personal preference when buying a new body.  I own a D3100 amongst my equipment and love it to bits, but I have to say that, were I in the market for a new entry-level body, and ignoring the fact that I have lots of Nikon lenses, I would probably go for the Canon at around $559 as it has several little niceties that the Nikon doesn’t.  There is little to choose from the major photographic aspects of these, and the Canon nudges ahead in the video side of shooting, but you certainly won’t go far wrong with either of these excellent cameras.