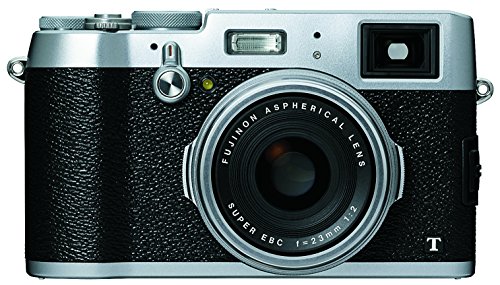 The Fujifilm X-100T: An Upgrade to Love

Some Features of the Fujifilm X-100T

The X100T is still built around the APS-C format, which is the same type of format found in larger crop sensor DSLR cameras. The X-Trans CMOS II sensor found in the X100S measures 23.6mm x 156mm and has a resolution of 16.3 megapixels.  This advanced sensor is the key to the camera’s excellent image quality. While some cameras have a larger resolution, the resolution in the X100T is more than sufficient for street photography and people photography, which is where the X100T excels.

One of the unique features of the X100T is the camera’s fixed Fujinon 23mm lens, which has an F-stop range of F2-16.  This lens is the equivalent of a 35 mm lens on a 35mm camera, due to the crop factor of the APS-C format. While some may feel that the fixed lens is limiting, it is perfect as it forces the photographer to concentrate on composition and zoom with their feet. Of course the resolution is sufficient to merely crop images in postproduction to “zoom” in on the subject.  The bottom line is that this lens is outstanding!  It is so good that it is the exact lens featured on the original X100 6 years ago!

One of the unique features of the X100T’s viewfinder system is the incorporation of an electronic range finder as a part of the optical viewfinder system. The photographer will use the manual focus ring found on the front of the lens to focus, just like a traditional rangefinder camera!  The X100T also has introduced real time parallax correction, which was a limitation of the optical viewfinder on previous X100 models.  What would happen is that the image captured was offset from the image seen in the viewfinder, with the offset getting worse that closer that the photographer was to the subject.  Now the X100T corrects for this automatically, eliminating the need to re-frame the image, as the image captured is exactly what is seen in the optical viewfinder.

One of the weaknesses of the original X100 was the “slow” autofocus system, which was slightly improved in a firmware update.  Although the autofocus system in the X100S was an improvement, the X100T really addressed the issue resulting in an excellent autofocus system that is fast to focus and holds focus very well.  The photographer will find up to 49 autofocus points in the camera’s viewfinder, with the ability to configure the points in a number of user-defined ways.

One of the great things about the X100T is that it does not feature a bunch of creative and scene modes, instead relying on traditional exposure modes including Program AE (P), Aperture Priority AE (A), Shutter Speed Priority AE (S) and Manual Exposure (M).  This forces the photographer to focus on technique, which is never a bad thing.

As most are aware, Fujifilm has along history of being a leading manufacturer of camera film and X100T owners are reaping the benefits of this history in the camera’s numerous film simulation modes, all of which are excellent.  One of the newer film simulation modes is the “Classic Chrome”, which is based upon Kodak’s Kodachrome film, which Fujifilm claims “replicates classic colors from the film genre”.  It is probably my favorite film simulation mode as the colors are perfect!

The X100T features an EXR Processor II, which processes images as they are captured as either JPEG or RAW files.   These files are written to an SD, SDHC or SDXC memory card found in the camera’s single memory card slot.  The processor is the camera is relatively fast, allowing the photographer to shoot 6 frames per second, which is pretty fast for a camera not intended for sports and action types of photography!

Images are previewed in the camera’s 3.0” fixed rear LCD display, which also is used to navigate the camera’s extensive menu system, as well as to compose images using the “live view” feature. One of the drawbacks of the X100T is the camera’s menu system, which takes a while to get use to and is behind the more user friendly and intuitive menus found in Canon and Nikon cameras.  Fortunately the X100T features a number of dials that allow the photographer to set basic camera setting without the need to go thru the camera’s menu!

The X100T performs well in a wide range of lighting situations and features a native ISO range of 200-6,400.  The ISO can be pushed down to 100, as well as up to 51,200.  As one would expect, image quality tends to suffer at very high ISO settings as image detail is reduced as the camera’s noise reducing software removes detail as it removes noise.  It is always recommended to keep ISO setting as low as possible for most types of photography.  Personally, I rarely shoot over ISO 800 with the X100T instead using the camera’s built-in flash in low light situations.

As stated earlier, the X100T is not designed primarily for sports and action types of photography and as a result, the shutter speed on the camera ranges from 1/4,000 to 30 seconds on the mechanical shutter.  The X100T also features an electronic shutter, which does allow for a very fast 1/32,000 second, although the usefulness of a shutter that fast is questionable.

As with all cameras today, the X100T is capable of shooting video in a variety of formats including full HD, which has a frame size of 1,920 x 1,080 and speeds ranging from 24-60 frames per second.  Video files are stored as .MOV files of the camera’s single memory card. While the video quality is acceptable on the X100T, it is still lagging behind other manufacturers and almost seems like it was included in the X100 lineup of cameras because it was expected.

Although the X100T does not feature a built-in GPS receiver, it does feature an excellent Wi-Fi and wireless system. This system allows the camera t interface with the photographer’s Smartphone or Tablet thru an “App” offered by Fujifilm.  This allows image transfer and remote operation of the camera. The lack of a GPS receiver is not an issue, as images can be geo-tagged via a Smartphone.

One of the unique features of the X100T is the classic rangefinder look of the camera.  This “retro” look is very appealing to both photographers and non-photographers alike.  While the camera looks great, it is also small and lightweight as well.  Measuring 5.0’ x 2.90” x 2.1” and weighing 14.1 ounces the camera is perfect for street style photography, travel and daily use.  It is also well built featuring a magnesium alloy top and bottom covers, a rugged thermoplastic body everywhere else, as well as metal dials.

Technical Specifications at a Glance

The Fujifilm X100 was responsible for re-energizing my passion for photography as it forced me to focus (no pun intended!) on the basics.  While the X100 remains a great camera, I was really happy that I recently upgraded to the X100T and cannot say enough great things about it.  I find myself shooting the X100T exclusively now, despite having a collection of way too many film and digital cameras.   Time to start getting rid of my other cameras as they are just collecting dust now that I have the X100T!