Canon has been leading the way in technological advancements for several years now with all of the other major manufacturers following in their footsteps.  One of the most exciting things for the consumer is how these technological advancements are finding their way into entry-level cameras at low price points.  Both Canon’s T3i and SL1, which are a part of Canon’s “Rebel” series of entry-level cameras, are two such cameras that produce excellent image results that would have been unheard of five years ago.  They also provide both the entry level and more advanced photographer a very user-friendly experience without “breaking the bank”.

A Side-By-Side Comparison of the Canon Sl1 vs T3i For ultra-portability with a minimal footprint, the EOS Rebel SL1 is the world's smallest and lightest digital SLR*. Weighing in at approximately 13 ounces, the EOS Rebel SL1's astonishingly compact size does not compromise its excellent performance as a member of the Canon EOS family.

Similarities Between the SL1 and T3i

Despite being introduced two years apart, the Canon T3i and the SL1 have many similar features including image format, megapixel count, autofocus points, shutter speed, frames per second speed, video capabilities, as well as other less significant features found on both cameras.

The Canon T3i and SL1 both use the APS-C format, which is commonly referred to as the cropped sensor format, are based upon a smaller sensor.  These CMOS sensors, which are cheaper to manufacture, allow Canon to keep the price point down on the “Rebel” line of cameras.    Although smaller than full frame sensors, the sensors used in both cameras are capable of capturing excellent images in both RAW and JPEG file formats.

Image quality is the most important feature of any camera and both the T3i and the SL1 produce excellent images, as a result of both cameras having an effective megapixel count of 18 million.  In some cases, this is higher that the megapixel count found on Canon’s significantly higher priced professional lineup.

The Canon SL and the T3i both have 9 autofocus points spread evenly throughout their viewfinders, both of which offer 95% coverage.  While some may believe more is better, too many megapixels can distract the photographer from properly composing the image prior to releasing the shutter.  It is important to keep in mind that many “professional” or “enthusiast” grade cameras only have 11 autofocus points. 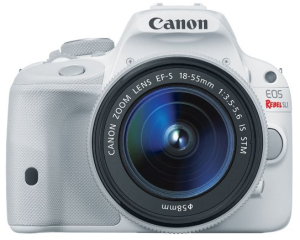 Another feature found in both the T3i and the SL1 is the ability to capture high definition video in a number of sizes and speeds in the MOV format.  This allows the cameras to operate as a traditional camera, as well as a video camera.  The only thing limiting the video capabilities of both cameras is the storage capacity of the memory card.

The T3i and the SL1 share a number of other similarities including a built in flash, a singe memory card slot, which can use SD, SDHC and SDXC memory cards, a 3” display, live view and the ability to use a variety of scene and traditional modes to capture images.

Differences: Distinguishing Factors Between the T3i and SL1

The major differences between the two cameras include the ISO range, weight, size and rear display.  The T3i has a normal ISO range of 100 to 6,400 and is expandable up to 12,800.  However, on the Canon SL1, the normal ISO range is 100 to 12,800 and is expandable up to 25,600.  This upgrade in the ISO capabilities are as a result of the SL1 using the DIGIC 5 processor, while the older T3i uses the DIGIC 4 processor.

On paper, the difference appears to be significant, however it is important to keep high ISO capabilities in perspective.  In real world applications, the ability of a camera to shoot at high ISOs is a function of the camera using advanced noise reduction software to reduce “noise” as the image is being processed.  Often images shot at high ISO settings will see a reduction in the sharpness of the details found in the image as the noise is being removed.  As a result most photographers will choose not to shoot at high ISO ranges to keep their images from appearing “soft”. The SL1 is significantly physically smaller as well as lighter that the Canon T3i.  While still small when compared to most cameras, the T3i measures 5.2” x 3.9” x 3.1”, while the SL1 measures at 4.6” x 3.57”x 2.74”.  While on paper the SL1 may only appear to be slightly smaller, the difference in size is very apparent when both cameras are placed side by side.  In addition, the SL1 weights a mere 13.06 ounces compared to the T3i’s 18.2 ounces, which is significant.

However, it is important to keep in mind that there are a couple of disadvantages to the SL1 in regards to Canon’s claim that the camera is “the smallest and lightest DSLR on the market”.  Some users may find their hands to be too big to comfortably handle the camera, while others may find the use of larger lenses on the camera difficult, as the camera body is not offsetting the weight of the lens.

The displays on the rear of both cameras are different as well, with the T3i using an articulating screen, while the SL1 uses a fixed screen.  The articulating screen allows photographers to capture images in unusual perspectives without the need to place their own bodies in unusual or contorted angles to get the shot!  In addition, the SL1 is a touch screen, so the photographer can navigate the camera’s menus quickly by simply clicking on the screen instead of scrolling thru menus, while using a wheel on the back of the camera.

The biggest pro to both cameras is that they provide excellent results and provide excellent values to the consumer, while also being easy to use.  Since Canon has introduced even more cameras into their Rebel lineup, it could be anticipated that these cameras will be even better values, due to price pressure as additional cameras are introduced.  This is especially true for the T3i, which is now 4 years old.  The biggest pro for the SL1 is the size and the weight, while the biggest pro for the T3i is the current price point. However, I’ve actually been able to find the Sl1 for only around $399 retail price (body only) at this secondary market listing. This negates the price differential.

The biggest con of both cameras is that they are old now, especially the T3i, which is 4 years old.  While the Sl1 is only 2 years old, technology is constantly changing and today’s top of the line camera is a dinosaur tomorrow.

Overall Recommendation: Which Would I Prefer?

While both cameras are excellent entry-level cameras, I prefer the Canon SL1 to the T3i for a couple of reasons.

First, I travel a great deal and am always looking for ways to save on space and weight and the SL1 is a great travel companion, especially when coupled with a 40mm STM pancake lens.  It weights next to nothing and can easily be wrapped in a t-shirt and carried in my backpack.  There is a lot to be said for traveling with a small DSLR in lieu of a small compact camera, especially since most compact cameras cannot match the image quality found in even the most basic DSLR cameras.

Second, while I am not a great fan of touch screens, I prefer this to the swivel screen found on the Canon Rebel T3i.  I find that swivel screens are not as useful as many people think and tend to be the “Achilles heel” of cameras, especially if you tend to be a bit rough with them as I do in the field.

Finally, as I’ve mentioned before, you can find the Canon Sl1 at this listing (with a decent starter lens kit) for just around $499. That’s $200 below retail price on the Canon site and still about $20 cheaper than the best available T3i price (at the time of this writing).

For ultra-portability with a minimal footprint, the EOS Rebel SL1 is the world's smallest and lightest digital SLR*. Weighing in at approximately 13 ounces, the EOS Rebel SL1's astonishingly compact size does not compromise its excellent performance as a member of the Canon EOS family.