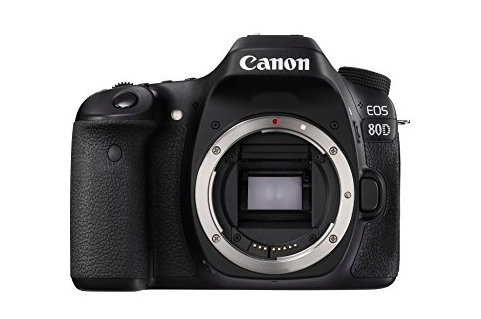 Canon 80D: The Best Combination of Value and Performance

Canon has been in many ways the leading manufacturers of film and digital cameras for a number of years and is the choice of photographers of all abilities around the world.  Over the years they have really stepped up their game by offering a number truly innovative DSLR cameras based on both the full frame and cropped sensor formats.  2016 was no exception. as Canon introduced several new cameras, with one of their most exciting cameras in recent years being the 80D, which was an upgrade to the very popular 70D that was originally introduced in 2013.  Although the 70D is only three years old and is still a very capable camera, the 80D is a significant upgrade and is well worth the cost.

Key Features of the Canon 80D

The Canon 80D is built in Japan and based upon the APS-C format, which uses a smaller and less expensive CMOS sensor that measures 22.5mm x 15.0 mm with still and video images being captured at 24.2 megapixels.  Traditionally, the larger full frame sensors found in cameras such as the Canon 6D of 5D Mark IV were considered to be superior to the smaller APS-C sensors found in cameras like the 80D.  This was especially true in low light conditions were the smaller sensor struggled with image quality at higher ISO settings.  However, advances in sensor technology has resulted in today’s APS-C sensors being basically equal in performance to the more expensive sensors found in full frame cameras.  The 80D is no exception, as the image quality is excellent; even in low light conditions, when the ISO is being pushed to the limits.  Images captured with the 80D are identical in appearance to images captured with full frame Canon cameras!

The 80D features an excellent viewfinder that is bright and provides 100% coverage, meaning that what you see in the finder is what you are going to get in the image captured.  This is a huge benefit when composing images and has traditionally been a downside on many APS-C cameras.  In the viewfinder, the photographer will find up to 45 autofocus points, which are well distributed in the field of view.  Autofocus is extremely fast and accurate, even with fast moving subjects, making the camera suitable for shooting sports and action.  In addition, the photographer will find additional information displayed on many of the camera’s settings as well.

The camera has all of the standard exposure modes such as manual, shutter priority, aperture priority and program, where the camera sets the shutter and aperture automatically.  In addition, the D80 also has a number of preset scene and creative exposure modes where the camera sets all of the controls automatically to optimize the type of image that the photographer is trying to capture.   In addition to being very useful, the scene and creative exposure modes are also fun to use as well.

Some of the Pros of the Canon 80D

One of the great things about the 80D is the speed of the camera as measured in frame rate and shutter speed.  As far as frame rate is concerned, the 80D shoots at 7 frames per second and is only 3 frames per second slower than the more expensive professional grade Canon 7D Mark II! The shutter speed range of the 80D is the same is 1/8,000 – 30 seconds, which is significantly faster than many other cameras on the market at this price point.

Once captured, images are processed by the camera’s DIGIC 6 processor, which processes images captured as either JPEG or RAW files.  These files are then written to camera’s single memory card slot, which can hold a SD, SDHC or SDXC memory card.  After the files are written to the memory cards, they can be pre-viewed on the camera’s rear tilting LCD display, which measures 3”.  The screen is bright and features touch screen capabilities that allow the photographer to access and navigate the camera’s menu system.   This screen can also be used to compose images using the camera’s “live view” feature.

Some Cons of the Canon 80D

While the camera has a relatively low native ISO range of 100-12,800, this is more than enough for the vast majority of lighting conditions, especially when good Canon lenses are being used.  When necessary, the 80D can have the ISO range expended to 25,600, although the image quality will suffer a bit as the camera’s noise reduction software reduces image quality as it reduces noise in the image.  In many ways, the push by all of the major camera manufacturers to include high ISO settings in their cameras is more of a marketing ploy and really is not that useful in the real world.

As with other digital camera’s on the market, the 80D features a variety of video formats including full HD.  In this format, images are captured at 30 frames per second with the frame size being 1,920 x 1,080 in .MOV format.  When video is recorded using MP-4 format the frame size remains the same, but the images are recorded at 60 frames per second.  One of the unique features of the 80D is the dedicated record button on the back of the camera, which is really convenient and time saving.

One of the most useful features on the camera is the C1 and C2 settings, which are found on the camera’s top dial.  These settings allow the photographer to store two of their favorite settings and allow them to be instantly recalled by simply turning the dial.  This is such a useful feature, especially to more advanced photographers that shoot in a variety of exposure modes other than “program”, as it eliminates the need to navigate the camera’s menu system to set up the camera.  It is a great time saver and is very useful in the field.

While the 80D does not feature GPS capabilities, it does have WIFI and wireless capabilities, which allow among other things the ability to remotely operate the camera using a Smartphone.  In addition the camera is able to share images to a number of devices thru WIFI, as well as direct print images to select printers as well.  The camera has a built in flash, which is great for fill in flash as well as low light conditions and can accept a variety of external flash units that will attach to the camera’s external hot shoe.

The 80D is a relatively small camera measuring 5.47” x 4.14” x 3.09”, but despite the size, feels great to handle even at extended periods of time.  This is true even when large and heavier lenses are used.  The camera is also lightweight, weighing in at 25.7 ounces.  This is possible due to the camera’s all plastic construction.  While durable and well made, the photographer will need to exercise care when using outdoors as the 80D does not offer any weather or dust sealing.

The Final Frame: My Recommendations

Consumers today are really benefiting from the intense competition between the various camera manufacturers, as well as the continuing advances in technology.  Canon has hit a home run with the 80D, as it is a great camera and in many ways is the best camera in Canon’s current lineup.  The reason being that it is the perfect combination of performance and value.  It is unheard of to have such a camera that offers both excellent technical specifications and image quality being available in an advanced body that retails for $1,199.00!