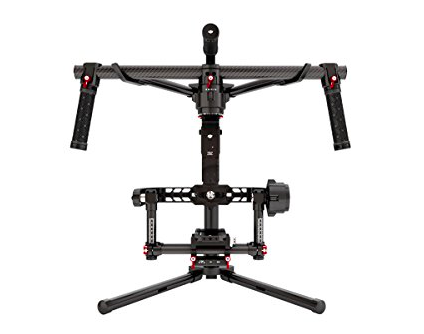 The Handheld Breaking All the Rules: DJI Ronin Review

DJI is well known for its high-end flying camera products and much of that success can be attributed to the introduction of the Zenmuse 3-axis gimbal system equipped on most of the company’s new products. Recently, DJI introduced a handheld gimbal system known as the DJI Ronin.

The Ronin 3-axis Stabilized Handheld Gimbal System is DJI’s first attempt at a handheld gimbal system capable of supporting medium to heavy cameras with a maximum load of 16lbs. Compared to similar products such as the Freefly Systems M15, the Ronin offers a lot of professional features for a fraction of the price. When the M15 first hit the market it came with a $12,000 MSRP. The Ronin, on the other hand, is only $3,000 and offers almost all of the same functionality. It’s worth noting that since the release of the Ronin, Firefly Systems has reduced the price of the M15 to about $5,000 in response to the features and capabilities of the much less expensive DJI product.

The main body of the Ronin is constructed of high-quality aluminum alloy and the handlebars are made of lightweight, but strong, carbon fiber. Even the transport case has been well-engineered and sports a 4-sided handgrip and 4-latch closure system that is durable yet easy to use in the field.

The gimbal system is the Ronin’s best feature. The operator is given the freedom of handheld shooting without hand-shake thanks to the 3-axis gimbal. Using brushless motors to control each axis, the Ronin prevents roll, tilt, and pan using a computer controlled system with precision control down to ±0.02°. The Inertial Measurement Movement (IMU) detects movements of the Ronin and automatically engages the motors to compensate for this movement. The system uses a complex algorithm to differentiate between intentional movements made by the operator and unwanted shake–something that the Ronin does quite well.

The system works so well that it isn’t limited to handheld camera operation. In fact, the Ronin excels when mounted in a vehicle or in other contexts where a rigid camera mount would result in excessive vibrations.

The DJI Ronin offers an impressive number of features including:

Support for Dual-Operator: One of the features that makes the Ronin stand out (especially considering its moderate price) is support for dual-operator shooting out of the box. In this mode, a second operator can use the included radio control unit to manually control pan and tilt independently of the Ronin’s movements. The included transmitter is a proprietary system operating at 2.4GHz. Operators can also choose to use a third-party transmitter thanks to the D-port bus included with the Ronin. Using the included transmitter, the second operator can control tilt and pan from as far away as 200 meters (although in most cases 100 meters appears to be the functional range of the equipment).

Configuration: Motorized gimbal systems like the Ronin require balancing before being used. Once initial balancing is complete, the Ronin can be configured for specific camera setups using the Assistant Software (available for Windows PCs and iOS). At the time of this writing, there is no support for Android devices although DJI states that this option will be available in the near future. Since every camera/lens combination has different weight distribution, the Auto-Tune Stability procedure adjusts each axis as necessary until all three are aligned. DJI also includes a gimbal stand so these balancing procedures do not have to be completed while holding the unit.

Operational Modes: The three operational modes mentioned in the previous section allow for limitless camera configurations. In Upright Mode, the gimbal can be attached to the roof of a vehicle or any other larger moving object and is the easiest way to bring the camera closer to the camera operator’s eye level.

Briefcase Mode allows the Ronin to be used sideways for better usability in corridors or other cramped shooting environments. Suspended Mode is when the gimbal is hung to create amazing camera movements near the ground. This is also the mode used when attaching the Ronin to a large quadcopter or conventional aircraft.

A Few Things to Keep in Mind

There’s not a whole lot bad to say about the DJI Ronin although there are a few things to keep in mind. When the stabilizer is operating, for instance, the noise of the gimbal motors can have an effect on audio recording quality.

Also, when disassembling the Ronin to fit back into its transport case, the handlebar positions are lost and have to be reconfigured once the operator arrives at the next shooting location.

Finally, the Ronin is heavy. At slightly over 9 pounds (without a camera attached), the gimbal can become difficult to maneuver during long, uninterrupted shots. A degree of strength, training, and stamina is required to wield the device for any length of time. That said, the addition of an Atlas rig moves the weight from the arms to the back making for much more comfortable shooting throughout the day.

The DJI Ronin is truly a game-changer in terms of performance and features at a price that most enthusiasts can afford. The brushless motors used to control the gimbal should provide years of worry-free service. The overall build quality is top-notch and the versatility of the Ronin makes it a necessary tool for an assortment of shots–shots that an operator simply wouldn’t be able to capture without using a high-quality gimbal stabilization system such as the DJI Ronin.

If you are looking for a high-quality gimbal stabilization system at an affordable price, look no further than the DJI Ronin. High-quality materials, a functional 3-axis gimbal system, and a host of advanced features combine to make the Ronin a must-have for any videographer looking to take their profession to the next level.